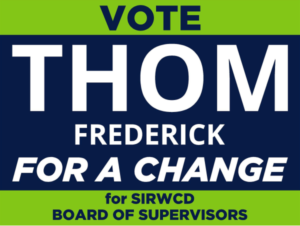 My name is Thom Frederick and I have been a resident of PBCE for 4 years and a resident of Florida for over 30 years after my service in the US Coast Guard. I moved to PBCE to enjoy the larger open spaces, access to the parks and trails without the headaches of other communities with restrictive HOA boards. I previously served for approx. 10 years as a board member for Lakeside Green HOA #5 after being invited to bring common sense and understanding of HOA rules to the existing board. Recently, I have decided to run for a position on the Board of Supervisors for SIRWCD after being approached by several homeowners asking if I would consider running for this year’s election.

I believe there is a need for greater transparency and accountability in order to alleviate the appearance of bias which the Board of Supervisors have taken an oath to avoid. As an example – The current 90% threshold policy for homeowner-initiated road improvements was approved in April 2017 contrary to the March 9, 2017 minutes which state “It was decided to present both proposals and a no-paving policy at the next Board meeting for landowner comments, and then take action at the May Board meeting.” When questioned, the replies were “Thank you for your concerns, but after spending more than six months on the new Policy, I do not see this coming back up”, “The process was far from perfect but was within the legal bounds” or no reply at all. The board does have full authority under Florida statute to make policy changes and the change was in fact legal but there was certainly an appearance that the change was possibly done with bias and is absolutely not consistent with the March minutes. I feel there are other areas of improvements that can be initiated without creating an undue burden on SIRWCD staff or the Board of Supervisors.  Consider the following:

If you too feel it is time for a change, please consider voting “Thom for a Change”. I would like to thank you in advance for considering me to represent everyone for the SIRWCD Board of Supervisors. If you have any questions, please call me at 561-628-8336.

If you are not already receiving emails from us regarding community news and important announcements, please click this button: